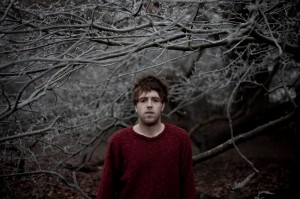 A while back, we posted about Brit folk singer Benjamin Francis Leftwich, who had yet to come stateside after the release of his album, Last Smoke Before the Snowstorm. He recently came through LA and we had the opportunity to sit down with him and talk about his music before the show. He then delved into an intimate set at the Hotel Cafe, where he played about 90% of the set unplugged. He stepped away from the microphone, stating, “You guys have been pretty quiet so I’m gonna be quiet, too. Because that’s how I wrote these songs.”

He played the last four or five sitting on the edge of the stage, and it felt like we were guests in his bedroom as he played new material to a small group of friends. Check out our interview after the jump to find out what song is his favorite to play live, what his all time favorite record is, and why if he wasn’t in music he’d be working at In & Out.

SM: So most kids in the States are still finishing college at this point and time or figuring out what they want to do with their lives. What’s it like for you to be touring around and seeing success at your age?

BFL: It feels good, you know, I’m happy to be on tour. I still don’t… I think people assume that because you’re signed to a record label and your song’s on the radio and stuff like that, that that in itself is success, but for me, I don’t see that as success I see it as a bonus to what I do and I feel most successful when I write a new song. There are times when I write lots of new songs and times when, you know, I’m not writing as much, but in the times when I am writing and being creative, I feel successful. So, it feels good, man, but I don’t feel… you know, I’m still really focused and I don’t let too many things go to my head.

SM: Who do you create music for?

BFL: I guess for myself, you know. I think I enjoy writing songs and I enjoy writing lyrics and I enjoy making up stories or even taking things out of experience in the first hand and kind of interpreting it in my own way. So I make music for myself and of course I like sharing it with people. It feels good to know that someone’s connecting with it.

SM: Yeah, and I read that you said you don’t necessarily like to write songs that are a straightforward story: beginning, middle and end.

SM: So where do you draw a lot of your songwriting from?

BFL: I think like anyone I’m inspired by the things around me and I want to take things from those like anyone would: growing up, relationships, going out, partying, meeting new people, falling in love, falling out of love, everything else, you know? And like any artist I think they’ve got their own way of interpreting those things around them. That’s what the song is and that’s who the artist is. I don’t think that any people find inspiration from particularly random or magical things, but the magic happens when you interpret.

SM: That’s awesome. Are there any songs you hold particularly close to your heart? Both from a writing standpoint or also maybe one that’s your favorite to perform live?

BFL: On my album there’s a song called “Butterfly Culture” that I’m really proud of the lyrics on that one. It’s one of the oldest ones off the record and I still feel really connected to it. I enjoy playing new songs live because they’re fresh, you know. That’s always what I like about playing new songs–

SM: See how the audience reacts to something new–

BFL: Yeah, it feels good when you create something new and you see that people are into it.

SM: That’s great, that’s great. So, people don’t generally paint their own versions of the Mona Lisa, or Starry Night, or Guernica, they don’t necessarily recreate their own scenes from The Godfather or Citizen Kane, yet remixes thrive everywhere. I’ve always wondered with music that’s as personal as yours, what’s it like to see your songs completely remixed by strangers?

BFL: It feels good, you know? Like, it’s another completely different genre of music to what I do, like an electric or dubby kind of thing, but if another creative person wants to take something that I’ve done and kind of… create their own thing with it, then that’s cool by me. Obviously I draw the line somewhere with letting people remix it or sample it or whatever, but you know, it’s kind of nice. Some of the remixes have been great, that really chilled, trippy electro remixes… I’m into that. I’m not so much into that hard, like, thing, but it’s good you know. Everyone wants to do something great, and if it’s with something that I’ve made, then… it’s cool, you know? A lot of bands can be like “Oh, we don’t want anyone to touch it” and all this kind of like hipster attitude, but I’m just like, whatever you know. I’m proud of the songs, I’ve recorded them in the way I want to record them. If someone else wants to do it I’m not gonna like, get the police to go into their house and… it’s silly, you know.

BFL: Exactly. I’ve never heard of someone do that. Unless someone like remixed a song to make it sound really shit. That would be bad. The worst mix of the song ever [Laughter].

SM: You know, live performances they change and adapt, they grow. Sometimes it takes a few shows for the artist to get a feel for their tracks. Especially new ones like you said you like to perform. How have you grown from when you started performing and where do you see yourself going in the future?

SM: Makes perfect sense. If you weren’t doing what you’re doing now, being a professional musician, what would you be doing? Is there a second passion that you find yourself being driven toward?

BFL: I’d work at In & Out Burger because I love the burgers so I could just eat them for free all day and go home and chill. I just discovered it, man, how fucking good is it?

SM: So fucking delicious. Have you had it “animal style” yet?

BFL: No, everyone keeps saying that. Is that with like cheese and onions?

SM: Essentially, they add a bunch of thousand island dressing and some diced up onions…

SM: It’s good. If you get it on the fries, though, you better get a fork.

BFL: Okay. That was my more serious answer. But my less serious answer is that I actually got a place at university in England for next year but obviously I’m not gonna go now, so–

SM: What would you be studying there, do you think?

BFL: I would study probably politics and international relations.

SM: Very nice, very nice. What did you find yourself driven toward in the classroom? Anything at all, or —

BFL: I just found myself wanting to go home and play guitar to be honest. Of course there were bits about the subjects we studied in school that I was really interested in, and I felt connected to, but I don’t like when you have to learn all the bullshit like learn people’s birthdays and stuff like that. I just didn’t see the point. I like learning about the message… it was kind of weird to have to learn the straight facts and then get tested on that, and then how you do on that test depicts what kind of further education you can go to… I wasn’t feeling it, really. I’m sure my friends are off finishing degrees and stuff now and some of them are going up for really sweet jobs and will be kind of set, but I’d rather be doing this. Even if it means staying in Motel 6s and eating lots of In  & Out.

BFL: I’m really happy with what I’m doing and I’m really proud of the songs, you know, and I just feel like I want to keep doing it. That’s always been my attitude since I was like sixteen.

SM: When did you first pick up the guitar? I mean, you say sixteen. I’m assuming or guessing you played before then, but why sixteen?

BFL: I use the age sixteen because that’s when I started playing solo gigs and writing for this kind of project. For my songs, because I was in a band before that. I started playing guitar when I was ten, had a couple of lessons and then quit because I didn’t like… I can’t read notation, so I didn’t like having to learn the theory and then picked up again when I was about fourteen and just kind of taught myself from there and listened to lots of music.

SM: That’s awesome. Here’s a hypothetical situation for you. Hopefully we’ll find out something about your musical influence in a totally different way that just saying “what’s your musical influence.” In this situation, your house is burning down. You can only take one piece of music from your library. You can either grab a) the entire collection of one artist, or b) any three albums of any artist, but only three of your choice. What are you grabbing?

BFL: Any three albums, and then can all be separate?

SM: Any three albums from separate artists or the entire collection of one.

BFL: And that’s all I’d have to listen to forever?

BFL: [Laughter] Okay, three years. I’d take… Bruce Springsteen’s Nebraska, I’d take Tom Petty’s Greatest Hits, just so I’d have all the hits in one place, you know, that counts as an album.

BFL: Cool. Yeah. I grew up in a place called York, which is a small town in the northeast of England. It’s a really chill place and that kind of gave me my own space to kind of work stuff out in my own head, and I had my best friends there and lots of my family there, so that whole environment… I feel really at home there. I think it’s important to have that space where you can go back to and reflect over everything and just kind of chill out for a couple of days.

SM: I understand that. Very much so. You stated that you’re into pushing yourself, challenging yourself, if you will, musically. With that said, what does the future for Benjamin Francis Leftwich hold? Both in terms of a second album or beyond that?

BFL: Well what I really mean by that is that I want to push my songwriting. I feel like I can keep writing better songs and I’m still figuring stuff out, you know. I’ve written a couple new songs from when I’ve been here, I got a couple new songs from back home, and I’m gonna do a new record in the summertime, I’m gonna play a new song tonight and just kind of… I just want to keep putting stuff out, you know? I don’t feel under any pressure to wait or rush… things will just kind of fall into place, I think. Along with that kind of chilled attitude, I want to be writing as much as possible.

SM: Alright, so we’ll end with the last question and keep it light and fun. And we’ve asked this question to other people we’ve sat down with. At this point and time in your life, if you sat down and wrote your autobiography, what would the title be?

BFL: [Pause] “Driving Through the Fog.”

SM: There you go. Thanks for sitting down with us, we really appreciate it.

BFL: Pleasure, man. Thanks for having me, dude.