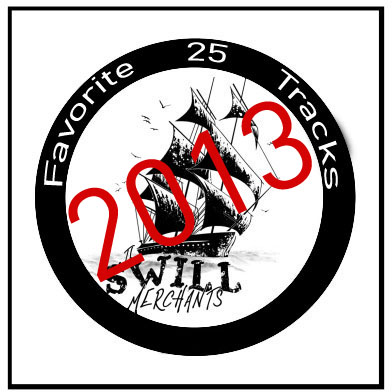 Welcome to the third time rounding the bend on this site’s favorite tracks of the year. Though, like the past two years, it was not a collaboration. Rather, just one individual’s thoughts and opinions. If you asked the shortest Swill Merchants member if she agreed with this list entirely, she would say no. That being said, this 2013 version is a little different as this year it’s presented with no individual song commentary. That was all too much the last two years. Below the embedded Spotify playlist of the 25 songs  are some rather quick and very random thoughts about my favorite 25. Still south of that are some quick-hitting stats regarding the 25. I figured that info isn’t worth anything more than what you would like to assign it but found it fun nonetheless. Lastly, at the very bottom, are the tracks that were the hardest to leave off. 2013… *tips imaginary cap.*

*  = Not available on Spotify and therefore not on the embedded playlist below. Soundcloud provided.

25 – Lady Lamb the Beekeeper
“Hair to the Ferris Wheel”

Stats for what it’s worth:

– Lorde blew up so fast she wasn’t on any “ones to watch lists” in 2013 and is now on her own worldwide tour, topping the billboard charts and “Royals” has reached overplayed by the radio status. Incredible.
– Society’s “All That We’ve Become” technically came out at the end of 2012 but I didn’t hear it until very late 2013 or 2014 so I’m cheating and am okay with it.

Too good to not mention: