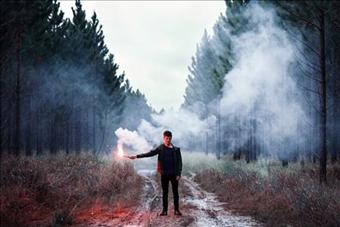 Welcome summer. It’s been here for a while but only now am I getting in the mood and with that comes summer music for all day beach barbecue fuel.

Despite the moniker, “Chalk Outlines” by Argentina, comes to us from Australia. While it doesn’t have the typical summer Aussie feel it strikes a chord with me as the transitional song that would perk up when the sun is going down, the food has been eaten and people are cracking open another coming in for an intimate conversation of few.

I love how music from around the world is treated in comparison to the States. Just due to the nature of our music industry and the music industry as a whole there isn’t a sense of unity. Sure on a very small local level but on a larger, even state wide level,  it’s not there like bands from the pacific northwest are all cheering for one another and clap when ones makes it on the radio. I’ve noticed this when it comes to local pride among fans but not so much amongst the artists themselves which is why I thought it really cool when asked about what Australian music as a whole is today’s artist replied: “…Something that I feel great about being part of. I feel a bit like we’re a team, and everytime someone puts out an amazing album or song, or gets recognized overseas I feel like we’ve scored a goal.”

The prevalent synths and piano give this heavily produced song grandiose feel. It is a pop song through and through at times making you wonder if it’s lacking some sort of misplaced importance that indie music is often given simply because it’s dubbed indie.  But if this is something that truly bothers you then know that the song does venture into darker tonal territories.

“My music doesn’t sound like me to me, and I really like that; how I’ve ended up with this alter ego that I sort of just stumbled upon.” That’s what Argentina has to say about his own sound. It’s interesting how he just played around, left hundreds of songs and samples unfinished until he found himself musically. So much an artist has a sound they know they want, or something they are aiming for when they sit down for the first time. It’s interesting to come across an artist who knew he wanted to do music and express himself in that way but didn’t know how best to do it right away. Didn’t know what suited him personally and creatively right away. Simply put, he found himself through the process. It’s refreshing.

As I often do, I try to picture the artists I feature live and as my diminutive only in size site partner will point out I’m often very harsh on live performances.  I imagine I’m not the most fun person to attend a show with as often I’m left feeling underwhelmed. However, Argentina seems to have tapped into my largest problem area issue with lives shows and put my fears to bed.  “I would really want it to be a show worth seeing, as opposed to pressing a few buttons and playing the album material verbatim.” And that is music to my ears.